A Quick Rebound In The Market - November Market Update

The Horizon Advisor Network Investment Committee met on the afternoon of November 8th. We spent time reviewing our economic and investment outlook and reviewing the positioning and performance of our existing model portfolios. We are happy to report that all the model portfolios tracked by the committee continue to perform in line or above their risk-adjusted, index-based benchmarks over the last one, three, and five years.

The Main Catalyst For The Rebound

After living through the first 5% pullback we have experienced since before the Presidential election last fall, the markets have quickly rebounded. You can see from the chart below, that after a brief break below its 50-day moving average in September, the S&P 500 has strongly bounced back to new all-time highs. 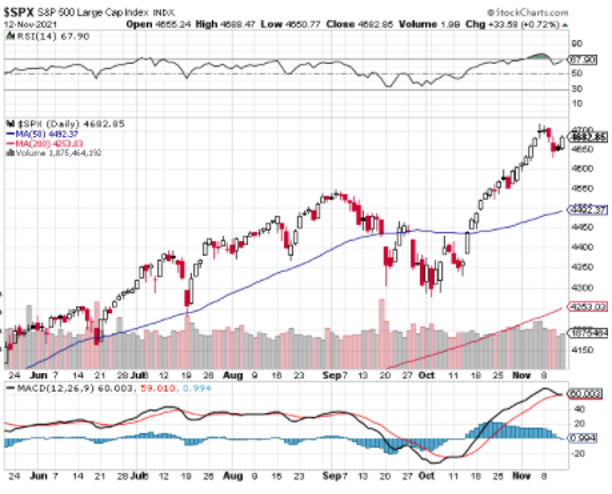 The main catalyst for the rebound has been corporate earnings growth, which has once again exceeded expectations by a wide margin. There was concern that corporate guidance would be negatively impacted by inflation pressures. However, it seems that corporations have been able to pass these higher prices on to consumers and maintain their profit margins.

There have also been a number of economic indicators that point to stronger economic growth over the next 3 to 6 months. Growth in the US economy slowed significantly to 2% in the third quarter, from the more than 6% pace of growth in the first half of the year. Several forward-looking reports now show that after hitting this speed bump, the economy is currently re-accelerating.

Supply chain issues and substantially higher energy prices and wages continue to put upward pressure on inflation, the Federal Reserve Bank has finally started to take its foot off the monetary stimulus accelerator. The Fed has been buying $120 billion a month of Treasury and mortgage bonds since the spring of 2020 when it started its emergency response to the COVID-19 economic shutdowns. This has continued for longer than many would have expected, given the strength of the economic and jobs recovery. 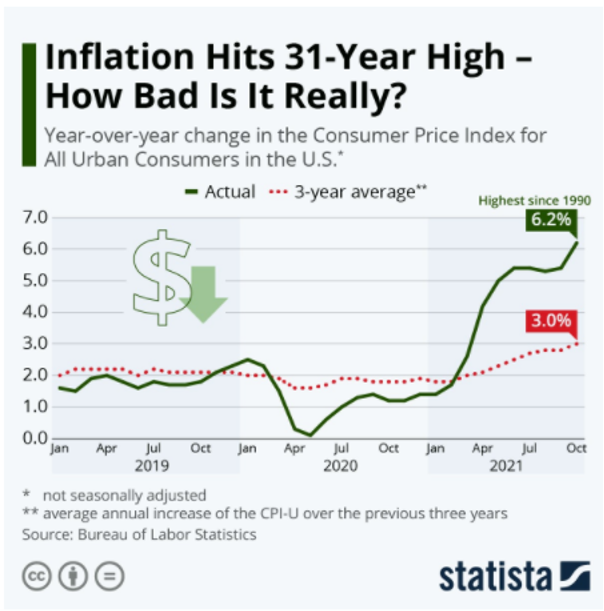 The Fed will begin tapering its bond purchases at a rate of $15 billion per month. It expects to conclude this program by mid-2022. The Fed has telegraphed this move over the last several months, so the initial response from the market was relatively muted. This stands in contrast the “taper tantrum” we saw in the spring and summer of 2013 when the Fed indicated the same intent with no notice and caused a near term panic in the bond market.

Former Treasury Secretary to President Clinton and Economic Advisor to President Obama, Larry Summers recently stated “When in the last 30 years have you been worried about inflation being higher than expected?” It should be noted that while the Fed is giving lip service to reducing emergency measures, buying an additional $500 billion of bonds over the next eight months, while keeping short term interest rates near 0%, is hardly punitive. Many fear that the Fed is behind the curve in combating inflation and may have to act in a more aggressive way. We shall see…

There is still a fair amount of political background noise as well. The House of Representatives has finally passed the $1.2 trillion “traditional infrastructure” bill which will be signed by President Biden. However, the so-called “human infrastructure” bill has been downsized significantly and is still a matter of intense debate and speculation. There are Senators and Representatives on both sides of the aisle waiting for the Congressional Budget Office (CBO) to score the bill to see what the projected costs will be. There is also concern about how to pay for all of this, as a couple of key Senators have stated that they are not willing to support a bill that is potentially inflationary or raises taxes.

We also have the debt ceiling issue on the horizon again. In early October, the folks on Capitol Hill agreed to a two-month deal that kicked the can down the road. Therefore, in early December we will likely have another round of partisan bickering and grandstanding to deal with, which could create additional volatility in the financial markets.

As a result of everything outlined above, the committee has made adjustments within a number of its model portfolios. These were done to manage risks and align the portfolios with both our economic outlook and perceived investment opportunities. As growth in China, and therefore Southeast Asia, is slowing due to several factors, we have reduced emerging markets exposure. At the same time growth and profits are picking up dramatically in Europe, something we have not said for many years. Therefore, we are increasing exposure to developed international markets.

After many years of outperformance, driven by technology and innovation, growth stocks appear to be stretched from a valuation standpoint. Several of our model portfolios have reduced exposure there, and rotated towards value stocks, as well as small and midcap stocks which have better valuations and more perceived upside opportunity. We should remind you, our trusted friends and clients, that when everyone gets focused on one particular type of stock or investment opportunity, it generally creates a chance to invest in areas that have been ignored by the markets.

We are also continuing to monitor the bond portion of our model portfolios. Economics 101 tells us that when interest rates and inflation pressures rise, bond prices retreat. Therefore, it is incumbent upon the committee to watch and manage these risks. This is something we are taking very seriously. We are actively exploring pro inflation assets that could respond well to these conditions.

I would like to thank all the committee members, as they put in an enormous amount of time and effort into the research that leads to these decisions. It is great to have a national team with varied backgrounds and expertise, working collaboratively to provide this investment market summary to our Horizon Advisor Network Community. Thanks, and have a great day.

Members of the Investment Committee

The views stated in this piece are not necessarily the opinion of Cetera Advisors LLC and should not be construed directly or indirectly as an offer to buy or sell any securities. Due to volatility within the markets mentioned, opinions are subject to change without notice. Information is based on sources believed to be reliable; however, their accuracy or completeness cannot be guaranteed. Past performance does not guarantee future results. All investing involves risk, including the possible loss of principal. There is no assurance that any investment strategy will be successful. Additional risks are associated with international investing, such as currency fluctuations, political and economic stability, and differences in accounting standards.