The Investment Committee met on the afternoon of October 11th. This meeting comes just three weeks after we last met. The committee members were happy to report that our model portfolios have performed in line with their risk-adjusted, index-based benchmarks over the last one, three and five years. Given the challenging and uncertain economic and political backdrop, we were pleased with the performance and risk management of the portfolios.

Possible Causes For The Volatility

The markets have been drifting downward over the last five weeks since hitting an all-time high in early September. The markets have struggled with bouts of volatility due to uncertainty around a number of issues, including future Federal Reserve Bank policy, the debt ceiling, government funding, and the course of future economic growth. The committee expects volatility to persist and possibly even increase over the near term due to these and other issues.

Once again, the government managed to avoid default by passing a short-term debt ceiling agreement, which funds operations until early December of this year. At that point in time, we will likely go through another bout of Capitol Hill induced volatility as both sides are already digging in around their opposing political viewpoints. It is amazing that very few people talked about the fact that they needed to raise the debt ceiling by $480 billion to fund the government for just two months. This means that the government is running up debt at a rate of nearly $60 billion per week, which is clearly unsustainable for the long term. Based on Google searches, people were clearly showing concern… 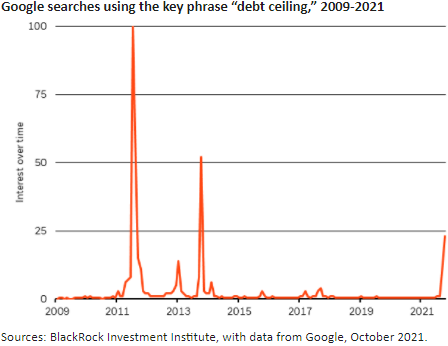 There continues to be uncertainty around the future path that inflation will take. Throughout the spring and summer both Fed and Treasury officials continued to suggest that inflation would be transitory and would start receding over the coming months. However, in recent congressional testimony, Federal Reserve Bank Chairman, Jay Powell, has stated that inflation remains stubbornly high, and this has been a frustrating issue for the Fed. This has been complicated by substantial supply chain issues, which has led to price increases on many goods and services. The price of oil and gas has risen dramatically and has more than doubled since the presidential election last year.

We also know that wage inflation is a real issue. Employers are paying up significantly for qualified workers. Job openings continue to run at record levels, and many employees are walking off the jobs in various industries due to upcoming vaccine mandates, further exacerbating the worker shortage. These do not appear to be issues that will be resolved in the short term.

Some Reasons For Optimism

Against this backdrop, there are some reasons for optimism between now and the end of the year in the financial markets. Over the last quarter, we have been through a soft patch of economic data. However, recent economic indicators are pointing towards an uptick in economic activity and GDP growth between now and the spring of next year. The Citigroup economic surprise index has turned up, the Atlanta Fed’s real time GDP tracker has ticked up, and the Conference Board’s index of Leading Economic Indicators has risen sharply, all pointing to stronger economic growth over the next six months or so.

There is also some reason for optimism that foreign stocks, especially European stocks, could be headed for a stronger period of performance. Valuation metrics are lower in Europe than they are in the United States. Inflation pressures do not seem to be hitting Europe as strongly as they are here at home, and corporate earnings growth seems to be accelerating in Europe at a faster rate than in the US. The committee will continue to watch these trends. We also know that there is disparity between the valuation of large-cap stocks and small/midcap stocks. This may provide some opportunity, as these areas of the market tend to do well in an economic recovery like we are currently experiencing. 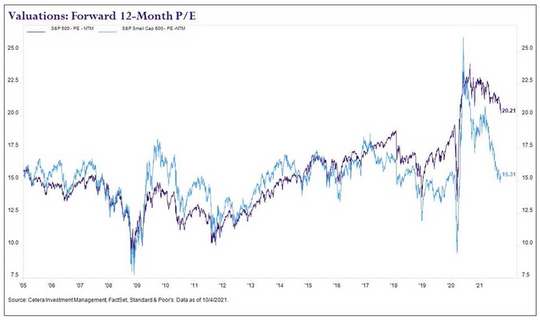 We are also heading into a seasonally strong period for the markets. On a historical basis, the markets tend to do well from late October through the end of the year, and often times through the first quarter of the new year. As earnings season kicks off over the next couple of weeks, there are expectations that corporate earnings growth could be as high as 30% on a year-over-year basis, compared to depressed levels coming out of the Covid shutdowns in 2020. We will be watching closely both top line revenue and bottom-line profit numbers, as well as the language in any forward guidance from the companies about their outlook for the future.

The committee will continue to monitor these issues closely, and stands ready to make adjustments as needed, as new information comes to light and/or economic and financial conditions warrant. We certainly appreciate your continued trust in our process of shepherding your hard-earned assets. As always, if you should have any questions regarding these issues or your own situation, do not hesitate to reach out to your advisor. Thanks, and have a great day!

Members of the Investment Committee

The views stated in this piece are not necessarily the opinion of Cetera Advisors LLC and should not be construed directly or indirectly as an offer to buy or sell any securities. Due to volatility within the markets mentioned, opinions are subject to change without notice. Information is based on sources believed to be reliable; however, their accuracy or completeness cannot be guaranteed. Past performance does not guarantee future results. All investing involves risk, including the possible loss of principal. There is no assurance that any investment strategy will be successful. Additional risks are associated with international investing, such as currency fluctuations, political and economic stability, and differences in accounting standards.